I believe for Enzo Sprigg being creative isn’t a hobby, it is actually part of his daily life. The multiple talents of this LA-based artist show up clearly on his third album ‘Cosmic Bipolar Nebula’. There is something definitely remarkable about this record that will surprise many people. In this project, he has been the singer, the producer, and the lyricist. Additionally, he also designed the album artwork and directed videos. In essence, he is an integral indie artist that enjoys experimenting with music. Taking as a main reference the work of David Bowie and his space-themed songs, his new material reflects his innermost emotions. In general terms, there’s a dichotomy expressed through lyrics: the good and bad of life. Likewise, a mélange of beats will please your ears. Let’s go track-by-track to find out more…

1 – Raygun Love Transmission The opening track takes the electronic pop form like the rest of the tunes on this album. Nevertheless, it’s my favorite one. I like the way Enzo delivers pure emotion while singing and getting philosophical. It’s kinda futuristic too!

2 – Pent-up Android Here the singer will infect you with his rock and roll attitude. This song features a robust pace that is gradually formed by synths, sci-fi sound effects and electric guitars. An interesting song about discontentment. The perfect anthem for those of you who are feeling stuck in a relationship.

3 – Gradual Decent Clearly influenced by Space music, the song starts with a preamble about discussing what is human identity and getting again philosophical about life for the next four minutes. In some way, this tune will also produce a trance-like state on listeners.

4 – Prime Industrial textures and hard-hitting beats will take full force as the song progresses little by little. In my opinion, the chorus is the best part of it: “So break the chains, this is your time”…

5 – Dark Matter The title says it all. This is the darkest song on the album. The combination of Electro Pop and the rockish vibe play out an original number. Nice vocals invite us to sing along with him.

6 – Oh Mother Finally, a great song for Mother’s Day! I like how Enzo sounds sincere with his emotions and feelings. A beautiful track with well-written lyrics. A touching song that paid homage to our lovely mothers.

7 – Swimming Through The White Noise At three minutes and forty-eight seconds, this song is quite enjoyable. He adds cosmic synths and dynamic electric guitar strings that will surely uplift your mood.

8 – Sangre’ (In Blood) This is the second song on the album that features a dark feel. If you are a real-life vampire, you will become fascinated with it, hahaha. Fully recommended for your Halloween playlist!

9 – Hyper Magnetic Touch It’s like a slow mellow song that contrasts with the previous ones. I don’t know exactly what is a hyper magnetic touch. Probably this term was taken from a Sci-fi novel and Enzo just made a beautiful ballad inspired by it.

10 – Cosmic Nebula Another potential hit song that could serve as a future single. He gets creative with the use of a variety of sound effects but still keeps a Space Rock style. I’m almost concluding Enzo is definitely the humanoid voice of a dystopian future.

12 – Prime (Way Past My Prime Mix) Augmented by heavier electronic beats the album ends with an outstanding remix of “Prime”. This is his ambitious take on the dance genre, and somehow it reminds me of the happy 80s music.

Overall, a top quality album that will left you craving for more exciting melodies.

Emerging Band Ocean’s Envy Should Be On Your Radar

If you don’t have Ocean’s Envy on your music radar, then you definitely should. The emerging band’s lead vocalist, Kurt Mantheiy along with friends Guilt Chip & PrototypeRaptor blessed us with a new song called “Fire”.

If you don’t have Ocean’s Envy on your music radar, then you definitely should. The emerging band’s lead vocalist, Kurt Mantheiy along with friends Guilt Chip & PrototypeRaptor blessed us with a new song called “Fire”. In a modern Electro-Pop style, passionate vocals reflect intense emotions of a complicated relationship. Moreover, he brings to life lyrics with an energetic interpretation from start to finish. Kurt comes from a Hardcore/Punk background, so it’s quite interesting you can still feel slight rockish vibes in his composition.

Guitar riffs, drums, electronic beats, and glorious synths are a winning combination on “Fire”. Inspired by Mineral, AFI, Chromeo, Elton John, U2, and Jimmy Eat World, this fresh gem is only a taster of the band’s next single, “Liquid Misery”, which comes out in late July. Stay tuned!

Believe it or not, the Ukrainian boyband Kazaky is back with a pride anthem! Known for their choreographies performed in high-heels, these guys do not put aside the dramatic dance moves…

Believe it or not, the Ukrainian boyband Kazaky is back with a pride anthem! Known for their choreographies performed in high-heels, these guys do not put aside the dramatic dance moves on the clip for “Fucking Beautiful”. Actually, they practiced social distancing while shooting these visuals due to the global pandemic. Definitely, this is a great song to add to your playlist for Pride month. Everyone was waiting for their return, so this singable jam seems to be the proper one that gets stuck in your head. In my opinion, a wise choice, can’t wait to hear more stuff from them. Video directed by Maxim Getman.

These Synthpop artists dropped an instantly catchy song called “Dangerous”. Of course, I’m talking about Babylon Club and vocalist Andrea Arthur whose passions for 80’s music are completely reflected in their signature sound. The emerging Argentinian-Canadian project makes sure you end up listening to their vintage rhythms on repeat. Beyond the old-school vibes, they also employ emotive qualities, and that’s the reason why their debut single will capture your heart. Lyrics express feelings of desires that turn into a romantic obsession that will probably cause problems. I think this colorful retro-inspired track wouldn’t be the same without Andrea’s wonderful singing voice. In fact, she’s working on an album that is coming shortly on digital streaming platforms. Stay tuned for additional info below.

Don’t you know I’m missing you?
Going crazy without you

Don’t you know I’m missing you?
Going crazy without you

What a great discovery! Solomon Carlson delivers new Electro-Pop music you’ll actually enjoy to the fullest. Notably, “Close” belongs to the group of catchy songs you must add in your Spotify playlist this year. 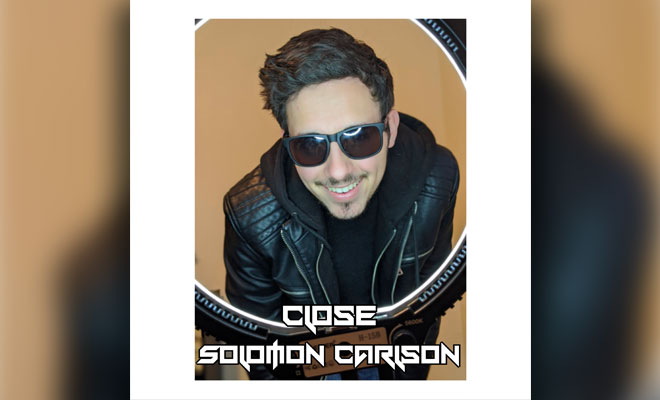 What a great discovery! Solomon Carlson delivers new Electro-Pop music you’ll actually enjoy to the fullest. Notably, “Close” belongs to the group of catchy songs you must add in your Spotify playlist this year. Beyond the romantic narrative of the lyrics, the tune stands out due to its uplifting vibes. The independent artist who loves singing and playing instruments currently lives in Fargo, North Dakota. He has been hooked to the world of melodies since his teenage years. Perhaps, this new hidden gem can follow the same path to success as his debut single, “Always On My Mind”, which amassed around 25,000 plays in a short period of time. Further, it didn’t take long for Solomon to win the hearts of curious listeners.

Likewise, fans of Jeremy Zucker, Ed Sheeran, and Troye Sivan will probably become interested in his style. In conclusion, “Close” is just as good to dance to as it is to listen to alone in your room. I swear, it will leave you eager for more. Stay alert via his socials down here.

When It Comes To Music For Fashion, Emily Daccarett Is The Chosen One!

There’s no one more qualified than Emily Daccarett when it comes to music for fashion shows and campaigns. As a matter of fact, the Los Angeles-based artist is a graduated designer from Instituto Marangoni in Paris but also a certified musician. With this in mind, she intertwines both worlds in order to create new forms of art. Not for nothing, her recent Electro-Pop single, “Growin’ Addiction” can easily serve as the background melody for catwalk or modeling sessions.

Take a listen at her 5-minute chilled gem, dripped with seductive vocals and a touch of sensuality. So far, it broke over 20K streams on Spotify, which is the reason why she’s currently working on a new album. Beyond the overall context that surrounds Emily, this song incites you to turn on the imagination and inner fantasies we are afraid of. In addition, this deliciously smooth track comes accompanied by anime-inspired visuals. It looks simple but it’s incredibly gratifying to the ears. Don’t think it twice, press play below.

Artists Of The Month